Could a smartphone app detect diabetes?

Today, millions of people in the United States are unaware that they have diabetes. A recent study finds that data from a readily available smartphone app could help detect diabetes in people without requiring a trip to the clinic.

According to the Centers for Disease Control and Prevention (CDC), more than 30 millionpeople in the U.S. have diabetes.

Worryingly, almost one in four people in the U.S. are living with diabetes but do not know.

Without treatment, diabetes can have serioushealth consequences, including kidney problems, eye conditions, heart disease, and stroke.

Currently, a doctor needs to take a blood sample to diagnose diabetes, which generally requires a trip to the clinic.

For a wide range of reasons, many people do not have easy access to healthcare, so it is important to find simpler ways of detecting diabetes.

Using an app to diagnose diabetes

Recently, researchers from the University of California in San Francisco decided to investigate an innovative and freely available solution: a common smartphone app.

They capitalized on a function that many fitness apps on the market already use, called a photoplethysmography (PPG) signal. This technology uses the smartphone's camera and flash.

When the heart pushes blood away, this generates a pulse of pressure that moves through the body. Peripheral blood vessels swell to accommodate the incoming blood.

By placing the smartphone's flash and camera next to a finger, it is possib

le to observe the minute changes resulting from this expansion of the blood vessels. With every contraction of the heart, the skin reflects an increasing amount of light.

The smartphone's camera can detect this change, and from this data, it is possible to extract information about blood flow.

In the early phases of diabetes, certain vascular changes occur. "Diabetes can be asymptomatic for a long period of time, yet adverse vascular changes still occur silently, which can lead to cardiovascular complications," explains Dr. Robert Avram.

"This makes it especially important for us to examine low-cost, noninvasive opportunities that make it easy to screen millions of people."

Screening with a smartphone

To investigate how smartphone technology performed as a diagnostic tool, the researchers recruited 54,269 participants through the online Health eHeart Study. This study used the Azumio Instant Heart Rate smartphone app, which is one of the heart-rate measuring apps on the market that people most frequently download.

The scientists created a deep learning algorithm that used the app's PPG signal to ascertain who had diabetes. They will present their findings on Sunday, March 17 at the American College of Cardiology's 68th Annual Scientific Session in New Orleans, LA.

When they pitted the algorithm against the database, the researchers found that it could correctly identify individuals with diabetes 72 percent of the time.

When they also incorporated information about other known risk factors, such as body mass index (BMI), age, and sex, the algorithm identified diabetes an impressive 81 percent of the time.

Importantly, their algorithm also worked the other way around — it correctly identified people as not having diabetes 97 percent of the time.

"Based on our findings, this strategy could become a low-cost way to screen for diabetes at home because it can be derived from any optical system that has a camera and a flashlight, and most people have a smartphone."

Of course, this technology cannot replace an official diagnosis by a doctor, but it might encourage someone to visit their doctor.

Dr. Avram is already carrying out follow-up research to investigate how the algorithm performs in different populations. For instance, the team is currently focusing on African-American and Asian people because they have a higher rate of diabetes than white Americans but had less representation in the initial study.

The scientists are also interested in finding out whether it might be possible to determine whether someone has early- or late-stage diabetes using this method.

The findings are encouraging; if data from a common smartphone app can help people catch diabetes earlier, this technology has the potential to affect millions of lives.

New device can detect cancer in just a drop of blood 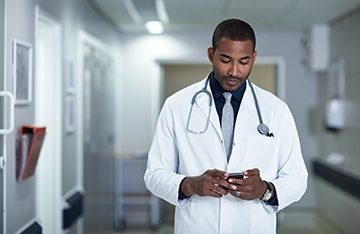